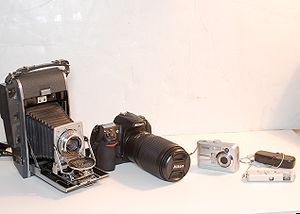 The Chinese philosopher Mozi born in the year 470 B.C. and died in the year 391 B.C.. he was the first to try to think of passing a light beam on a pinhole, but he did not reach what can that phenomena be used at.

The Greek polymath Aristotle whom was born in the year 384 B.C. and died in the year 322 B.C., reached to the same concept of Mozi.

Ibn al-Haytham, as born in the year 965 and died in the year 1040 in Egypt . Ibn al-Haytham was an Iraqi physicist, astronomer, mathematician, ophthalmologist and philosopher had many contributes in the visual perception. He invented a dark box by completing the work of , Mozi, Aristotle and Al-Kindi -the concept of passing a light beam in a hole, he was able to reach a whole image of outdoors to indoors.

The English philosopher Roger Bacon (1214-1294) was able to reach a better image by making the whole smaller in the year 1267.

The name camera obscura was first given to the dark box by the German mathematician and astronomer Johannes Kepler (1571-1630) in the year 1604. Then he added a lens and made the camera transportable.

The German Johann Zahn (1641-1707) made a big contribution by reaching a smaller camera. Making the portable camera more practical.

The Double-lens camera was first introduced in the year 1870.

The first film photographed by a movie camera was made in the year 1888.

The folding camera was available in the year 1930, after the introduction films.

The first Single-lens reflex camera was produced in Japan in the year 1952.

The first digital camera was invented by the American Steven J. Sasson born in the year 1950. He was working for Kodak when he reached to his camera.