The concept of the steam power is benefiting from water energy by boiling water and using the steam to generate another form of energy usually mechanical energy.

The first device that used the steam power was the aeolipile, it was made by Heron (the Alexandrian Hero) the Greek mathematician and engineer. He invented the device in the beginnings of the 1st century. The aeolipile rotated due to the exiting of the steam from the pipes, actually no one used the device in a beneficial use, just to show how much power that the steam can produce.

In the year 1690, Denis Papin produced another invention the piston steam.

In the year 1698, the first practical engine using the steam power was produced by Thomas Savery (1650-1715) the English inventor. It was a water pump, although it was exposed to explosions but it was useful in mines. 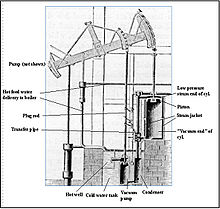 While across the ocean in the year 1801, Oliver Evans (1755-1819) the American inventor was working on another high pressure steam engine.

In the year 1849, George Henry Corliss (1817-1888) the American engineer and inventor produced the Corliss steam engine, which was a great improvement of the previous engines as it used less steam and the speed was higher. The idea of the engine was using four-valve counterflow with separate steam admission.