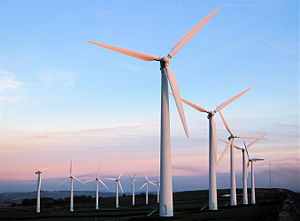 Wind is the movement of air caused by the difference of the pressure, as the air moves from the regions with high pressure to the regions of low pressure.
Wind can be classified according to its force starting from calm or gentle breeze to storms, hurricanes or typhoons.

Wind of course is not invented by human, but there are inventions made by human in order to benefit from the wind power. Wind power or wind energy is the form that we use

to benefit from the wind, scientifically it is the kinetic energy of air during its motion. The Wind power is the cheapest source of energy that human can use.

The first use of the wind power was thousands of years ago, as the Ancient civilizations sailors used the wind energy to reach other civilizations for trade.

But the first harnessing of the wind power was by the Persians in the 9th century, as they were the first to invent the windmill, their windmill had horizontal blades fixed to a vertical axle and was used to drill water and grinding wheat and corn.

The Persian windmill spread to China, then India where the Europeans transferred it to the rest of the world. In the 11th century the Dutch whom are the most known people for using windmills, used it to pump water from low areas to upper areas in order to implant those high lands. In the 12th century the Europeans made a great modification by making the horizontal axle.

The breakthrough of using the windmills to generate electricity came in the 18th century, when the Scottish engineer James Blyth (1839-1906), in the year 1887 he built the first wind turbine. In the same year across the ocean, the American inventor Charles Brush (1849-1929) invented the first automatic wind turbine.

By the beginnings of the 20th century, windmills were used as a source of electricity all over the world especially in the United States of America. The three blades windmill was first constructed in the year 1957 by Johannes Juul (1887-1969) the Danish inventor.

In the 1978, the big Danish supplier Økær made a big change in the windmills, as they made the windmills rotate clockwise unlike the prior windmills that used to rotate anti clockwise.

Wind farms appeared in the year 1980, when the American analyst John Ellis Eckland (born in 1942), as the Fayette Manufacturing Corporation. He raised the first wind farm in a rented piece of land. From that success the wind farms spread all over the world.

In the 21th century,  the windmills are controlled with computers. There are various types of windmills as vertical windmill that don’t depend on the direction of the wind, Darrieus turbines, the Giromill and the Savonius wind turbine. The wind farms are built everywhere even offshore.

In the last decade the world realized the need for the clean and cheap sources of energy, like solar and wind energy and the scientists are working all over the world to find new inventions that harness the power from the wind and Sun.