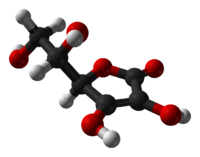 Vitamin C is also called L-ascorbic acid or L-ascorbate. People who suffer from the lack of vitamin C can suffer from scurvy. Trying to cure Scurvy was the cause of discovering vitamin C.

The first one who noticed the relation between vitamin C and scurvy was James Lind (1716-1794) a Scottish naval surgeon and physician, in the year 1747 he noticed that the people who drank lemon and orange juice were cured from scurvy. But he didn’t know that vitamin C is the cause of the cure.

The citrus were used to cure scurvy without knowing the importance of vitamin C till the Norwegian A. Holst (1860-1931) discovered that the cause of the cure in the citrus was vitamin C, he started his researches in the year 1907 and reached that conclusion in the year 1912.

The first scientist that was able to isolate vitamin C was Albert von Szent-Györgyi (1893-1986) a Hungarian physiologist in the year 1928, he was rewarded by Nobel prize for that discovery.

Dr. Tadeusz Reichstein (1897-1996) a Polish and Swiss scientists was the first to artificially synthesis vitamin C in the year 1935.

Later it was discovered that vitamin C protects the body starting from cold and flu and help in the quick healing of all respiratory infections. It also help the body to overcome the cardiovascular problems. On the other hand its deficiency affects the gum and cause its bleeding. It can even help the healing of stomach diseases that causes the happening of gastric cancer. Vitamin C can also reduce the inflammations that could cause the growing of tumors.