The artificial pacemaker is the device which controls the heart beats in order to help the patients who have cardiac problems.

The idea appeared first in the year 1899, by the British J.A. McWilliam when he discovered that an electrical impulse can affect the heart by controlling the ventricular contractions reaching 60 or 70 beat/minute.

In the year 1926, Dr. Mark Lidwell (1878-1969) The Australian doctor, along with Edgar Booth The Australian physicist, invented a device that could control the heart beat through using a light source. The device was used to help a new born baby.

In the year 1932, Albert Hyman (1893-1972) the American cardiologist invented a device that was using a spring-wound motor that works by hand. Hyman was the first to use the term artificial pacemaker.

In the year 1950, the Canadian electrical engineer John Hopps (1919-1998) invented another external pacemaker using the notes of the Canadian surgeon Wilfred Gordon Bigelow (1913-2005), Hopps used the electricity from the plugs in the wall. But Hopps device was very painful for the patients that used it.

Paul Zoll (1911-1999) the American cardiologist, invented a smaller device and it got its power from a rechargeable battery .

In the year 1958, the Colombian engineer Jorge Reynolds Pombo born in the year 1936, invented in England a device that used a battery with 12 volt. Pombo device was used to help an old man by connecting the  electrodes to his heart. 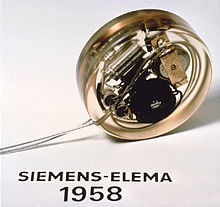 In the same year across the ocean the American engineer Earl Bakkenborn in the year 1924, was able to reach for the first wearable pacemaker. The device was put in a plastic box which controlled the beats of the heart through the electrodes that was attached to the surface of the heart.

In Sweden in the year 1958 also the first implanted pacemaker was used by the Swedish surgeon Åke Senning ((1915-2000). Senning used the device that was invented by the Sweden inventor Rune Elmqvist (1906–1996). Arne Larsson was the first patient that used the pacemaker. 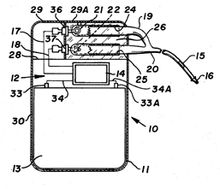 In the year 1971, Wilson Greatbatch (1919-2011) the American engineer made a breakthrough in the industry of pacemakers by using lithium anode cells which he invented.