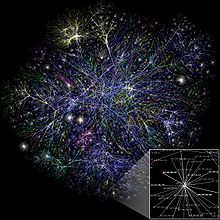 The Internet include many ideas and concepts, different scientists were responsible for creating each idea or concept.

The first major concept was in the year 1960 and was meant to be for marital purpose, ARPANET stands for Advanced Research Projects Agency Network, it is considered as the first operational packet switching network. The ARPANET was set by the USA Department of Defense to be used as a communication link between more than one computer. The ARPANET was invented by
Lawrence G. Roberts born in 1937, Leonard Kleinrock born in 1934, Robert Elliot Kahn born in 1938 and Vinton Gray “Vint” Cerf born in 1943, they are American computer scientists. The last two scientists later in the 80’s they where able to invent TCP/IP, which was considered a revolution in the Internet.

In the same year 1960 but accross the ocean Paul Baran (1926-2011) a Polish American engineer along with Donal Davies (1924-2000) a British computer scientist invented a packet switching computer networking, while working for the National Physical Laboratory.

In 1970 the French research network was established and was called the CYCLADES. The part that CYCLADES added to the Internet is that it made the host not the network responsible for the delivery of the data. As the ARPANET the government was the sponsor of the project that several companies and institutes shared in that project. The CYCLADES was invented, designed and directed by Louis Pouzin a French scientist whom was born in 1931.

Till the 1980’s the Internet was not used by the public, when the National Science Foundation (NSF) started developing ARPANET to be the Computer Science Network (CSNET), and in the year 1986 NSF made a new breakthrough when it was able to make an access to the computers in the USA from the education and research centers.