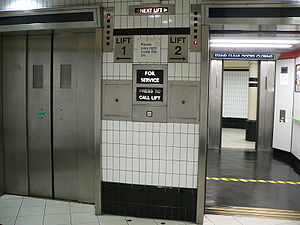 There are so many lifts around today that we rarely think about them. However the prevalence of lifts in towns and cities is a relatively modern phenomenon.

The need for cities and towns to expand upwards and the introduction of the disability discrimination act has meant that the use of lifts in modern society has become absolutely essential.

But who actually invented the lift? Incredibly the ancient Egyptians had

their own version of a lift which was depicted in hieroglyphics. They utilised pulley systems which would have been operated by slaves and servants and were therefore reserved for the use of the very rich.

The first recorded description of a lift type device was recorded by a Roman named Vitruvius. He credited the invention to Archimedes around 236BC.

During the 17th century as the wealthy became even wealthier many palaces and great houses across Europe utilised lifts, but the design was not much changed from that used by the Romans and the Egyptians. The lifts still needed human power to work.

In 1823 the first lift which operated on a ‘screw drive’ system, known as an ‘ascending room’ was introduced in the UK and soon became famous.

The invention of the ‘ascending room’ spurred on many other engineers to come up with their own versions of lifts and by the mid 1800’s there were several different kinds of lifts in operation all over the world.

However, the fatal flaw of all these lifts was the fact that if the system of ropes used to pull them should snap, the entire lift would plummet to the ground causing death and destruction. However one man came up with an ingenious solution to this problem and the basics of his system are still utilised in lift manufacturing today.

That man was Elisha Otis, who introduced the first safety lift in 1852. Otis revealed his invention in 1854 at the New York World’s fair to a rapturous reception. The lift incorporated a clever braking system which made it impossible for the lift to plummet if the cables snapped. In 1857 Broadway, New York was the setting for the installation of the first Otis safety lifts for public use. A few years later another inventor called Alexander Miles patented the first automatic door lift.

Now most lifts use a combination of Otis’ and Miles’ inventions but have of course developed the technology used into something far more sophisticated. Today, major cities all over the world compete to create the fastest and highest lifts, so much so that there is much debate about which country can lay claim to the accolade today.

Currently the top candidate for the world’s fastest lift is in the Taipei Financial centre and can reportedly travel at 1010mpm. The highest glass lift is in China and is utilised to transport passengers to the peak of a 1070 ft high hill.

These days all types of lifts, including bespoke lifts, commercial lifts and passenger lifts can be found all over towns and cities across the world.

2 thoughts on “Who Invented The Passenger Lift?”