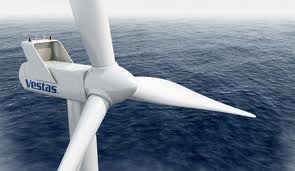 Vestas, a manufacturer of wind power turbines, recently announced that it will build the largest offshore wind turbine in the world. This turbine, when completed, will measure in at 164 meters (538 feet) and will surpass the current King of wind turbines, a 420 foot rotor in Spain. This is almost as large as two American football fields.

This project will help the EU take a big step forward towards renewable energy, as the goal was set to have 13 percent of power from renewable sources by 2020. Says CEO of Vesta, Ditlev Engel, “Seeing the positive indications from governments worldwide, and especially from the UK, to increase the utilization of wind energy is indeed very promising.”

In its press announcement about the offshore endeavor, Vestas stated: “Lowering the cost of energy In relation to offshore wind is essential for the industry. Some of the major stepping stones in achieving this are size and subsequent increased energy capture, which means a need for much bigger turbines that are specifically designed for the challenging offshore environment.”

Anders Søe-Jensen, president of Vestas Offshore, believes the offshore wind market will expand over the coming years, especially in regions like the Northern part of Europe, where the conditions at sea are particularly rough.

Vesta is no stranger to offshore wind turbines. The company has installed over 580 turbines offshore, which is approximately 43 percent of the worlds.

Hank Shalom, a local business owner of Soho Fashion ltd in NYC, says that’s just fine by him. “Cheap, clean energy? That’s living the dream.” And with the cost of wind turbines coming down thanks to advancing technology, and fossil fuels increasingly expensive, we can expect to see more wind turbines and green energy being produced; just another step closer to living the green dream.